Strategic Business Choices Can Give You Wings

Increasing pressure over the last couple of years has occurred in many industries, including the spray foam industry. However, with a set of valuable business techniques, companies may fly through these turbulent times into the skies of victory by resisting the cultural pull towards fast results and instead building a business based on managing time and labor. The Spray Foam Magazine team spoke with Warren Merrell, owner and CEO of Texas-based Thermo Dynamic Insulation, longtime SES Foam customer. He highlighted how experience led him to use a particular kind of business model to achieve success, and how these processes have even led him to purchase an airplane and insulate its hangar with spray foam. In 1998, on a trip to visit his brother in Dallas, Merrell first discovered spray foam insulation.

He recalls, “My brother was working in the construction industry. I was constructing my own home at the time, and my brother showed me the insulation he was using. This was the first time I had ever seen spray foam and I knew I had to have it.” The trouble was, Merrell could not find a contractor in Idalou, TX. So, instead, he researched training and equipment to learn how he could do it himself. He started off with one trailer, a Gusmer FF-1600, and after completing the spray on his personal project, he became obsessed with SPF, and this soon grew into a thriving business. He now owns 10 rigs that are all double hosed for a total of 20. Before Merrell discovered the spray foam industry, he was a cardiovascular perfusionist. In basic terms, he ran the heart and lung machine during operations like open heart surgery or any operation where it was necessary to artificially support a patient’s circulatory or respiratory function. He split his time between working at the hospital and spray foaming, eventually hiring a team. Merrell makes a point of saying, “I never ask any of my team to do anything I don’t know how to do myself.”

This can-do attitude is the basis for his successful business and after several successful years, Merrell decided to get his pilot’s license. He now has a single engine six seat plane and when he’s not flying to meet clients, or helping fix any of the rigs and machines, he takes his family on vacation to places like the Bahamas or Jamaica. Merrell’s airplane hangar is in his backyard within walking distance of his shop. 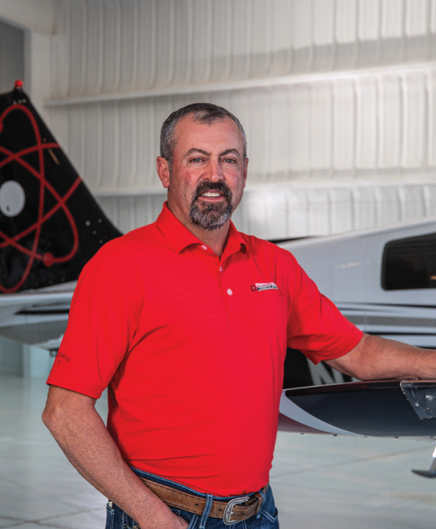 His neighbor is a corporate pilot and built the runway, so Merrell said he would build and spray the hangar. “It’s so convenient when I need to fly and see a client or deliver a part. If my guys are on a job and break down, I can fly there, fix it, and fly back. Even today, one of my crew needed a new hose and I flew it to them.

The journey was one hour and twenty minutes each way. By car this would have taken six hours each way.” stated Merrell. The 5,625 sq.ft. hangar was sprayed with one inch of Nexseal SES 2lb closed-cell with 3.6 sets of foam applied. Thermo Dynamic Insulation has been using SES foam for a long time. In fact, Merrell was one of their first clients. “They have taken care of me, and I have with them. After we sprayed, we then painted the hangar. I wanted it to be aesthetically pleasing as well as a great spray job. In Merrell’s words, “The hangar is bright white and insulated. Now that it’s foamed, we don’t get the dust on the plane and its climate controlled. Here in Texas, it can get very cold in the winter and extremely hot in the summer, so the spray foam helps keep the plane in great condition.” The hangar was a straightforward spray including the prep, spray, and paint. The one unusual aspect of the job involved the blue floor coating that went all the way up the base of the four foot purlin. This resulted in a heavy protection on the foam up to the first base. The blue of the floor coating and then the white of the spray foam not only looks cool, but it also provides a tougher coating on the base when the hangar is being power washed. There is also a bifold 60ft door and according to Merrell, “The only real way to effectively insulate these types of doors is with spray foam.” 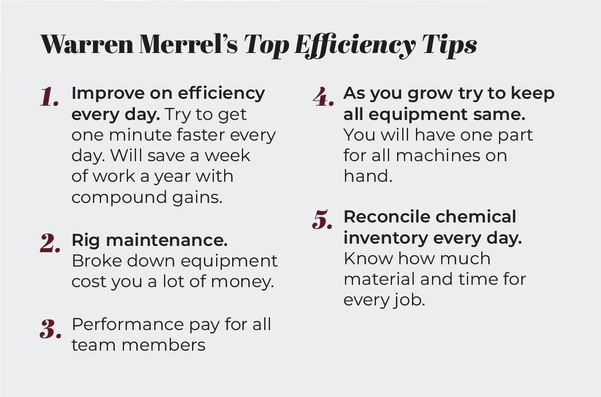 The crew of four, two sprayers and two helpers sprayed the hangar using a PMC PH40 to apply the foam. They used a single proportioner (one pump, two hoses) with two guns and have used this method for twenty years. The job took one day to spray. The trailer the crew used is unusual because it’s Merrell’s concept. It has pressurized, three-set tanks, so there is no mechanical pumping of the material to the machine. The compressed air is put on top of the tank at about 40 psi that delivers the material to the machine. This unique trailer concept came to Merrell through his experience over the years with 90% of his crews’ problems in the field derived from the transfer pump. For example, pumps failing, dried up foam in the A side, letting the pump run dry and cross over on the gun.

With zero moving parts, Merrell and his crew no longer need to buy pumps because they can use the air to push it down, which also makes it sealed. They never need to touch the system; the trailer is clean and neat. Merrell highlights, “Think of all the efficiencies on that. Usually, every time someone sprays a set of foam, somebody has got to go over and move the drum pump to the other barrel and start spraying again. You could be in the very back of an attic and have only two small runs, run out of material and have to go all the way out and switch the drum pump.”

Merrell came up with the concept of the spray foam hose reel and the tanks and then gave this information to Tanner Pounds, owner of SPF EVOLVED who was happy to make them. SPF EVOLVED is now selling this air-operated automatic roll up reel and the tanks. Merrell added, “This roll up device really saves contractors’ time and effort after a long day of spraying.”

Merrell and his crew pride themselves at being good at what they do. They are constantly trying to achieve whatever makes dollars and cents/sense. They also concentrate on reconciling their inventory every day and by managing the inventory so closely, they can bill in the evenings when the crew go home. Merrell emphasizes, “If we have 20 crew standing around in the morning filling up the drums, that’s a lot of time and therefore money. If you can save fifteen minutes a day running up the hose, thirty minutes in the morning not having to fuel, and an hour throughout the day not having to move the transfer pumps, that adds up. All those factors we try to manage down to the tightest part as they soon add up, day in and day out. I think that’s part of our success, and that’s why we remain highly profitable. We can get so much more work done by trimming the fat. Those minutes compound every day.”

Throughout the interview, this astute businessman is enthusiastic and passionate about the industry and his business, which he runs like a well-oiled machine. Mechanically inclined, he fixes machines, solves problems, and emphasizes the importance of saving time to ensure his business stays profitable. As the artist Frida Kahlo said, “Feet, what do I need you for when I have wings to fly?” 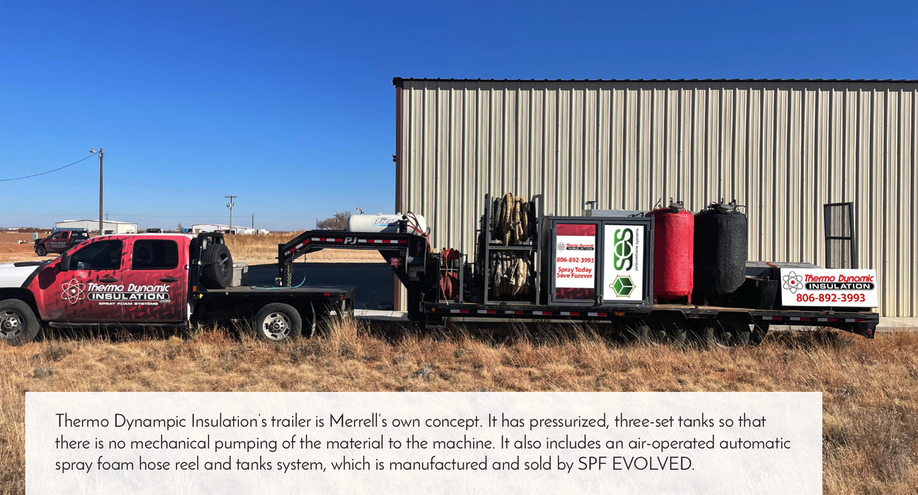 Retrofitting SPF in a Crawlspace