From weddings to weekly worship, large crowds are common place at churches, which is why church builders must consider the sheer number of people that will periodically occupy the building during its construction period. Builders will want to ensure that these folks are comfortable while they are inside the building, but more importantly they’ll want to make sure that the building acoustics are ideal during services. One way to accomplish both of these requirements is by installing cutting-edge insulation to the structure. This was the case during the construction of a Georgia church, where the general contractor brought in Energy One America (EOA) specifically to apply spray foam insulation.

EOA signed on for the insulation application project during the build-out of St. Anne’s Cathedral in Richmond Hill, Georgia. Due to certain constraints encountered during the building process, the project’s progression lagged and the general contractor found himself two weeks behind schedule. To alleviate this, EOA proposed to expedite the spray foam installation to get the project back on track.

“We had originally been given two weeks to complete the spray foam application,” said EOA’s Jason Pluchinsky. “So I told him, ‘If we could get it done in two and a half days, would that help you out?’ He was ecstatic with the notion of getting back on track and we knew we could deliver.”

Pluchinsky had only one condition in order to accomplish this feat: to clear out all of the other trades from the cathedral and let his team work alone. The general contractor agreed, prompting Pluchinsky to bring in the EOA cavalry, comprised of 4 rigs and a 10-man crew. The spray rigs were specifically parked in each corner of the building to more easily access the designated spray areas. Each rig was equipped with a Graco H-20/35 Pro proportioner, 300 feet of hose, and a Graco Fusion air-purge spray gun. The 15,000 sq. ft. project area consisted of an arched, plywood substrate that encompassed the exterior walls and the roofline, which was steeply pitched to a 75-foot high peak. The project itself predominately entailed the application of open-cell spray foam for insulation and sound deadening, as well as the application of closed-cell spray foam insulation for structural rigidity in certain areas where framing members were not big enough to achieve the R-value specified for the application. 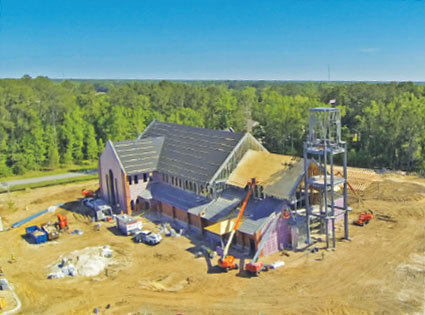 BIRD’S-EYE VIEW a view of the exterior of St. Anne’s Cathedral building envelope from above

“Cathedrals where religious sermons are held – which will be one of St. Anne’s main functions – can benefit from the sound deadening properties open-cell SPF insulation offers, so that the only people hearing the sermon are the ones inside the cathedral,” said Pluchinsky. “The owners, the staff, and the churchgoers will experience a quiet environment with idyllic insulation that actually lasts longer than any other type. The only other option would have been fiberglass insulation, which would’ve fallen off over time and rendered the church without an air barrier. It is really no wonder why the building operators went with spray foam.” 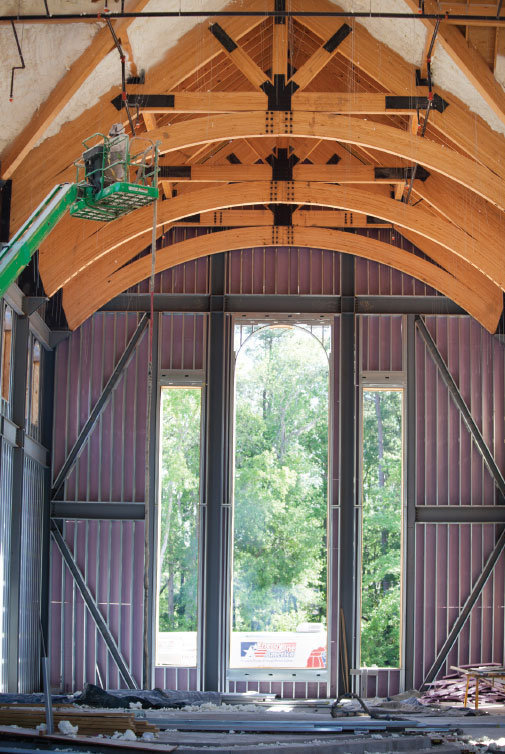 Since only the frame of the cathedral had been built and no windows had yet been installed, there were large openings at the end of the building that allowed for optimal cross-ventilation throughout the project. The EOA crewmembers were outfitted with PPE consisting of Tyvek suits, gloves, boots, and respirators. For prep work, the EOA crew covered the cathedral’s floor with large tarps for overspray damage protection. They brought in several scissor lifts to work around the lower areas of the exterior walls, as well as a 40-foot lift; two 60-foot lifts, and an 80-foot articulating boom lift to work around the peak of the cathedral beyond the rafters.

“Getting up above over some of the balconies of the cathedral proved challenging. It meant working around tight angles that would have been nearly impossible to get to without the use of an articulating lift.

“Getting up above over some of the balconies of the cathedral proved challenging,” said Pluchinsky. “It meant working around tight angles that would have been nearly impossible to get to without the use of an articulating lift.” 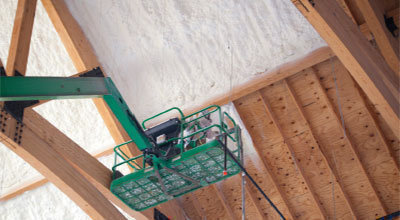 Then, the EOA crew installed to the exterior walls and roof underside 11 inches of SES Foam 1 lb. open-cell spray foam insulation. According to Pluchinsky, 80 percent of the project consisted of open-cell spray foam application, which totaled an installation of 18 sets of foam.  Pluchinsky noted that there were as many as three sprayers applying foam at the same time and that the remaining crewmembers worked in concert to ensure maximum productivity.

“Keeping a large supply of foam ready at all times was essential to reduce downtime and successfully meet our objective,” said Pluchinsky. “The crew knew it was a race against time. The sprayers were going through the foam rapidly, averaging a set of foam per hour, so aside from the crewmembers manning the rigs, we had two crewmembers solely in charge of switching the mixers, switching the pumps, maintaining sets of foam preheated, and loading more drums into the back of each rig. We had to make sure that all four rigs were kept busy at all times.” 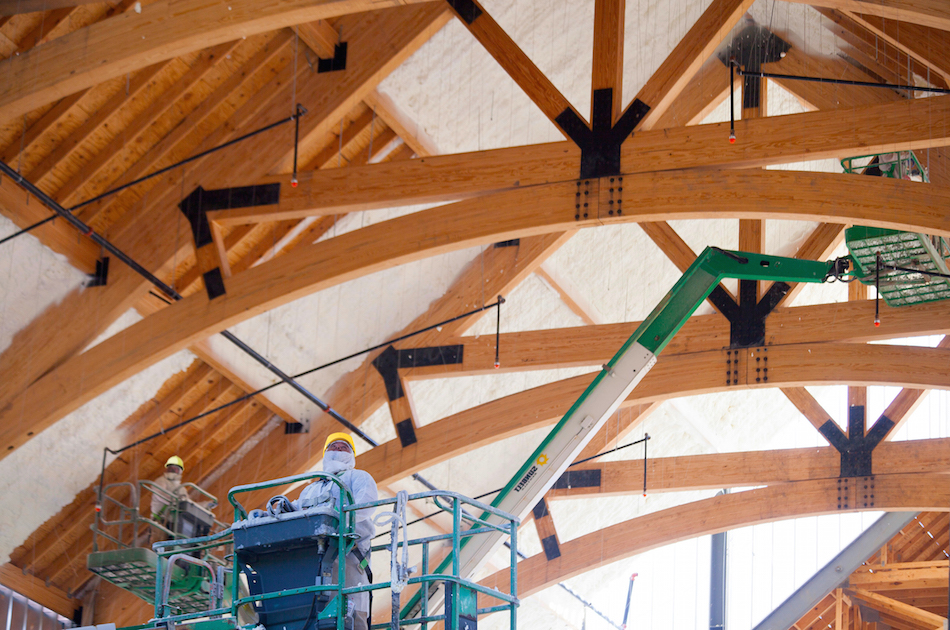 After the open-cell foam had cured, the EOA crew applied to the open-cell foam 20 mils of DC315, an intumescent, fire-protective coating formulated by IFTI. The coating provided a 15-minute thermal barrier for the SPF insulation. Drywall was later installed over the closed-cell foam. With the foam protected, the project was completed within EOA’s stipulated time-frame. The general contractor was at that point back on schedule and could resume construction of what will be both a landmark and a place of worship for the Richmond Hill community.

Get right in the middle of the application with this video overview of the St. Anne’s Cathedral project.

The Lifeblood of Every Business

Small Changes Can Make a BIG Difference
Scroll to top