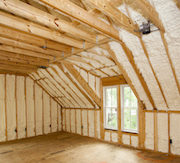 Spray Foam has been widely used in attics for nearly 30 years as an important insulation and air sealing option for builders and to provide homeowners energy conservation and improved indoor environmental quality. The first code to recognize unvented attics appeared in 2000 in Florida and in 2004 the International Residential Code recognizing unvented attic assemblies and differentiated between air permeable and impermeable insulation materials in section R806.4.

By 2007, unvented attics were routinely sprayed across the US using both low-density and medium-density foams but attic fire testing at the time was unsophisticated and relied on an inappropriate fire test. The ICC Evaluation Service challenged the antiquated fire test for attics and crawlspaces so the SPF industry worked closely with ICC-ES to develop a new standard.

There were some who disagreed from the start that any large scale fire testing was necessary so long as a foam product passed ASTM E-84 as a Class-II foam (<75 flame spread and <450 smoke developed). Others wanted a full NFPA 286 test with thermal barriers or equivalent applied to all foam plastics in attics or crawlspaces. Those who promoted forgoing large-scale fire testing cited experiences where low-density foam in closed attic assemblies involved in fires extinguished, apparently due to oxygen depletion before the fire burned through the assembly. Those who wanted full thermal barrier protection cited loss of life in fires involving foam plastics.

The industry worked together through SPFA’s Building Envelope Committee to develop a workable standard and while committee members had widely divergent opinions, a compromise was struck and new a standard emerged for peer review. There were forty-two active members of the committee representing 25 companies and organizations, all related to the SPF industry and all invested in creating a well respected fire performance standard. While the new standard was being developed, it was called Appendix-X as a placeholder but over the months it took to finalize, the title became so widely known the industry kept the moniker permanently.

For nearly a decade, the spray foam industry has had a well-crafted and universally accepted fire performance testing and listing standard with Appendix-X. Our industry standard has been highly respected by building officials, insurance companies, architects, engineers, builders and SPF industry professionals and all who spray foam in accordance with Appendix-X have complied with the intent of the code. Recently, however, some have fallen back to the premise of not controlling ignition of SPF, instead they believe it’s appropriate to let it burn until the oxygen in the attic is depleted to the point it will no longer support combustion. Experience tells us this strategy might protect the structure from total destruction, but does it protect the people who might have inadvertently started the fire or those who occupy the home? And, with its non-standard construction details, will the alternative method actually be built as specified and remain in operable condition for the life of the home?

Many questions and concerns have been raised but the so-called “oxygen depletion” test or modeling protocol is not published and the engineering firm promoting it has declined to share it with our SPFA Building Envelope Committee for peer review by industry professionals. We know one thing for sure. Any foam plastic intended for use in attics that has not passed the industry standard Appendix-X fire test is not Appendix-X compliant.

One such low-density, open-cell foam was SucraSeal® from SES Foam, which uses sucrose in the B-Side to help suppress ignition. This was revolutionary when it was introduced and SucraSeal’s Appendix-X fire performance was so good, many of the other systems houses worked to develop similar products. The industry has matured and today there are many Appendix-X compliant spray foam options available to SPF contractors for their builder and homeowner customers.

There are still some in the industry who believe there’s not a need for spray foam to be slow to ignite and slow to propagate fire. They believe fires started in an attic can be controlled by simply letting them burn out due to oxygen depletion. While this might work for a fire started by lightening or an electrical malfunction where no one is around to be injured or to die in the fire, it could be far more serious for an HVAC technician or plumber who accidentally starts a fire while brazing copper pipes. It could also be the cable guy whose work light starts a fire, or it could be kids doing what kids shouldn’t but sometimes do to start fires. In those situations a fire with unprotected foam that can’t pass an Appendix-X test could propagate so quickly it might be impossible to escape to safety. If you think about it, using oxygen depletion in a confined space works best when you have a rapid burn to consume the oxygen as fast as possible. This idea is contrary to everything the industry has worked so hard to promote over the last forty years, that spray foam is safe and an asset to your home.

In today’s litigious construction environment it’s important to consider who might be held liable if a serious problem arises. If installing the special attic hatch is part of the fire performance qualification for foam in the attic, is the SPF contractor responsible for assuring proper installation and operation of the hatch? If another trade installs it is this a liability you’re willing to accept? What happens if the bath fan ducts don’t get foamed completely and what happens to the UL listing on flex duct if it’s encapsulated with SPF? Experience tells us the building inspector might not thoroughly inspect the installed SPF to confirm compliance with the ES report, but in the event of a fire, forensic engineers hired by attorneys for the insurance companies are very likely to find every minor deviation from the ES report requirements. Before using a non-prescriptive and non-industry standard protocol, you need to ask yourself what’s your appetite for risk?

We asked some highly respected industry professionals what they think of Appendix-X, how it has served the industry and their thoughts on oxygen depletion as a fire control strategy. Here’s what they had to say:

Roger Morrison1, of Deer Ridge Consulting, has been in the SPF industry for decades and has conducted batteries of fire tests using the old SWRI 99-02 test and the current Appendix-X test. Roger questions code compliance of the oxygen deprivation method as the intent of the code is to suppress ignition of the foam. Since ignition barriers in the code are a substitute for thermal barrier protection for exposed foam in attics, it doesn’t appear that a comparison can be made between prescriptive ignition barriers and exposed foam allowed to freely burn in the attic until

there’s not enough oxygen left to support combustion. The Appendix-X standard does compare an SPF assembly to a prescriptive ignition barrier assembly.

Morrison is also concerned about workers in attic spaces who might accidentally start a fire. The attic hatch would necessarily be open for egress and the workman might even have a fan running for cooling or confined space ventilation. Under these circumstances, unprotected foam might have an adequate supply of oxygen to propagate a fire too quickly for the worker to escape. The structure could also be at much higher risk of destruction.

When asked about the cost of installing SPF to the current Appendix-X standard compared to the oxygen deprivation protocol, Roger thought the cost might be similar. He noted the additional cost for the different attic hatch and more foam to coat exhaust ducts and to seal recessed lights, fixtures and fitting in the attic with spray foam.

Mac Sheldon2 of Sheldon Consulting LLC added his concern about abandoning Appendix-X. He noted the many good options for compliance with the peer reviewed and widely adopted Appendix-X standard and questioned why any SPF contractor would risk potential exposure to additional liability.

Prior to his nearly twenty years in spray foam, Sheldon was an HVAC contractor for 15 years and understands how tough it can be to braze copper refrigerant line-sets in attics. High temperature solder requires a torch and shaded eye protection. He thinks it’s not unlikely for an HVAC tech to accidentally start a fire in the attic, which might not be a foam fire initially, but the fire could quickly spread to unprotected foam. By the time the HVAC tech lifts his goggles, the flame could be spreading up the sloped ceiling and there might not be time for the workman to escape.

Since the oxygen depletion protocol doesn’t appear to include control over the air handler, if a fire does ignite and a supply duct in the attic is breached while the air handler is running, a virtually unlimited supply of oxygen could fan the fire to an inferno in minutes. Sheldon too, wonders who might be liable if the unthinkable happens.

Henri Fennel3 of HC Fennel Consulting LLC is a respected SPF professional who has installed and inspected spray foam jobs all over the East Coast and who has been involved with code and standard development and active in SPFA committees for thirty years. One of Henri’s concerns is the general lack of understanding of foam specifications by SPF installers, building officials and builders and he sees the oxygen depletion protocol as unmanageable since many contractors don’t even get the simple and well known processes right.

The oxygen depletion protocol has raised many unanswered questions in the industry and it’s important for SPF contractors to ask questions of their own. Ask any homeowner if they would sacrifice their attic to save a life. Ask any workman from any trade required to enter attics with spray foam in them if they’re comfortable working around unprotected foam. Ask your insurance company if they will cover losses if you use this protocol. And, ask yourself if you’re willing to take the potential risk of using a non-industry standard protocol shrouded in secrecy.

Want to join the discussion?
Feel free to contribute!